Hamlin, who has been at a Cincinnati hospital since last night, went into cardiac arrest after making a tackle and remains in critical condition.

In normal times, it would have been nothing less than ashtoning for anyone to have contrived such a senseless theory, but we’re living at a time when a certain percentage of America will, sadly, believe anything – and without an iota of evidence.

“Every hit in the NFL is violent,” Shroyer said. “And I’m willing to say — and I don’t think this is a reach and a lot of people won’t like this, but I’m sorry it’s the truth. Folks, the gentleman collapsed and had a cardiac event because of the hit.”

“The vaccine did not cause him to collapse on the field,” he continued, noting that Hamlin’s vaccine status was unknown.

How an NFL hit could stop a heart – Vox

Duh! Hamlin’s condition was brought about by a high-impact collision that caused trauma to his heart and chest area. Anyone who watches the video can see that. 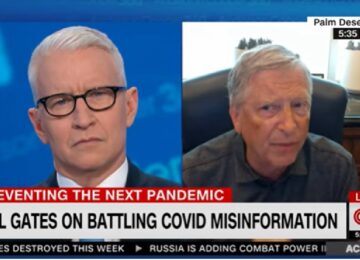